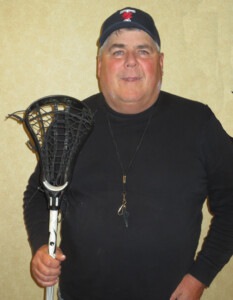 Jim Calder got his start in the world of Girls & Womens Lacrosse when he brought his daughters out to the Toronto Stars’ house league box program and became involved as a volunteer coach and became more involved with the rep program.
.
The former Team Canada field player and Hobart College All-American brought his experience from past lacrosse leadership roles (Toronto Lacrosse Club and Toronto Rock Lacrosse) to bring more structure to girls’ box, organizing parents and volunteers to help expand the girls’ program and bring opportunities for other young athletes to try out the sport in a no-pressure, no-contact setting.
.
As numbers began to dwindle in local girls’ box lacrosse leagues, he saw the opportunity for Stars girls to make a switch to field lacrosse, organizing team bus trips to the US to find exhibition competition and to expose the Stars girls to live gameplay before officially joining the OWL (now OWFL) as a team in summer 2008.
.
From there, he worked to secure field space and coaches from University of Toronto’s varsity program, helping Toronto’s newest local field program grow and adapt to the many features required to run a competitive club program in Ontario.
.
By the time his eldest daughter was wrapping up her U-19 career, he had managed to grow the sport in other parts of the city, supporting the recruitment of volunteers and equipment lending to get the TDSB high school league going, and working with Toronto Beaches volunteers to start house league opportunities for younger girls to get involved in lacrosse in addition to the U-15 and U-19 Stars rep teams.
.
At the peak of their tenure as a team, that first group of Stars players managed to secure a 4th place finish in the u-19 A division, with a narrow one-goal loss to Orangeville in the bronze medal game.
.
Though the Stars programs have since merged into the Beaches as a larger club, they provided a solid foundation for today’s coaches, facilities, and exposure for the Beaches girls’ program – many former Stars players and fields are still core parts of the Beaches program today.
.
Without the many hours of work and networking that Jim put into building the club, none of this would have been possible!

Yvonne Harding began her life in lacrosse as a career trainer for the girls field program from 2013-2019, aiding and supporting several players on their way to silver and bronze medal provincial finishes.

Going through the registration process as a parent for box, field, and girl’s field as well as a volunteer and trainer, Yvonne experienced everything wrong with the system firsthand, taking it upon herself to become the club’s registrar.

Over the years, through many conversations about zoning laws and releases, she learnt the system better than anyone else and moved it to an efficient online platform before transitioning to be the Director of Registrations for the whole of Ontario Women’s Field Lacrosse (OWFL).

During her role as Director of Registrations, Yvonne facilitated the integration of several new clubs into OWFL, helping to grow the game for girls across the province, increasing accessibility and competition for the league.

At the same time, she continued her involvement as a passionate volunteer for The Beaches organization, on the bench as a trainer and at McCowan and Cherry Beach with the girls’ house league program on Tuesday nights.

Yvonne helped foster a safe environment for girls of all skill levels to push themselves as athletes, encouraging them to be confident in their mistakes and proud of their accomplishments.

A prime example of which was the introduction of OWFL Play Day’s for the new U9 “Minis”, focused on fun and play rather than the competition.

Yvonne has spent close to a decade supporting and creating sustainable opportunities for girls lacrosse in order to grow the sport and fulfill players’ dreams.

Thanks to our Sponsors